The forex market economic calendar for Monday 12th February 2018 is very light, as there is only important economic data related to the economy of Switzerland. This indicates that the first trading session of the week should be rater quiet, in the absence of important fundamental data to move the market. However later in the week there are plenty of economic events which have the potential to move the British Pound with the release of the CPI, the Japanese Yen with the release of the GDP growth rate, the Euro again with the GDP growth rate, the US Dollar with the CPI and the Australian Dollar with the unemployment rate.

The US inflation rate on Wednesday 14th February 2018 is extremely important for the trend of the US Dollar which as of past week has in general appreciated against the main major currency pairs except for the Japanese Yen. The recent strong US job report has caused a large volatility and selloff for the US stock market and the global capital markets as there have been increased fears that the Fed will raise the key interest rate probably in March 2018, and possibly 1-2 times more in 2018.

These are the main economic events for today in the forex market:

A rising CPI may weigh positively on the Swiss National Bank to raise interest rates in attempt to manage inflation, while higher interest rates support the Franc making it more attractive to foreign investors, which can lead to the appreciation of the Swiss Franc against other currencies. The forecast is for a stable yearly inflation rate at 0.8%, and a decline on a monthly basis with a reading of -0.1%, lower than the previous reading of 0.0%. The forecast from the graph shows that the inflationary pressures in the Swiss economy are expected to be very weak, indicating that other fundamental factors such as GDP growth can support the appreciation of the Swiss Franc, or even geopolitical external factors. 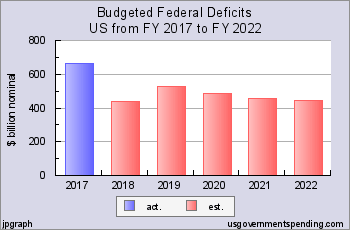 The budget balance in essence measures the difference in value between the federal government’s income and expenditure during the reported month, with a surplus being considered positive for the US Dollar. Deficits over time are unsustainable and recently there is a political uncertainty in the US about the government shutdown.

As seen from the chart the trend is expected to be a downward over the next years to be sustainable for the US government and supportive the US Dollar.